Beginning with Thursday’s mountain stage comes a stretch of four critical stages – three in the high mountains and one individual time trial. The first eleven stages included four with significant exchanges of time between GC contenders: the team time trial saw Jumbo Visma and FDJ hang with Team INEOS while Movistar and AG2R lost big chunks of time, stage 6 was the first mountain stage where Geraint Thomas took time on every rival, stage 8 saw Pinot and Alaphilippe escape to take time back, and stage 10 saw a select group including Thomas, Bernal, Nairo Quintana, and Adam Yates take over 1.5 minutes on Pinot and Jakob Fuglsang due to a split in the crosswinds.

The net is that among serious GC contenders, Geraint Thomas already leads everyone but Bernal and Steven Kruijswijk by at least 30 seconds – ballooning to over two minutes on Romain Bardet and Fuglsang and three minutes on Mikel Landa. After today, Geraint Thomas has risen over 55% likely to win the TDF according to market odds on Pinnacle Sports. Not only is he leading the GC contenders now, but he’s shown moments of serious strength like the end of stage 6 and his recovery on stage 8 that point to him being in similar form to last year.

We’ll discuss the time trial in stage 13 before getting into the mountains which will be featured in stages 12-14-15. The time trial is just 27km over rolling terrain; the total vertical gain and length are very close to grand tour averages. This should produce very similar results to the average time trials, and in the last nine TDF individual time trials we’ve seen the winner take about 3 seconds per KM on the rider in 10th position on the stage.

Based on the data, it looks like a two man race between Rohan Dennis and Wout van Aert. Dennis has the track record and is half a second faster than anyone else in the peloton with a significant ITT track record. He’s surely been targeting this stage from the start. However, van Aert has been completely dominant in two ITTs this year – winning similar length stages in both the Belgian national championships and the Dauphine by half a minute. Unlike Dennis, you can count his time trials raced on one hand since the start of 2018.

Most years we have a couple GC favorites like Froome or Contador who excel in the time trials. That may be the case with Geraint Thomas this year as he’s performed well in TT stages in the past (including 3rd last year in the final TDF time trial), but so far this year he’s been about 1.5 seconds/KM slower than someone like Dennis. The only other relevant GC man for the stage win is Steven Kruijswijk who has been slightly faster than Thomas in TTs.

Besides Kruijswijk, the next best GC rival to Thomas are either Bernal or Fuglsang, who rate about 0.8 seconds/KM worse than Thomas/Kruijswijk. This is another advantage for Thomas; based on his lead already and the more comfortably projected gains in the ITT, he can ride extremely defensively in the mountains and wait to use his late kick to take time in the closing kilometer like in stage 6 this year and stages 11/12 last year.

Things start to look a bit dire – given the existing time gaps – as you move down this list. Pinot has probably looked strongest among Thomas’s rivals so far – he’s just been unlucky to get caught out on stage 10 and drop 1.5 minutes. But even he is projected to lose half a minute more to Thomas. We can also see Kruijswijk’s path to the podium; gain 30-60 seconds over the other contenders here and hold serve in the mountains.

The race finishes with three mountain stages in the Pyrenees and three more in the Alps. The challenges will be completely different though. The Pyrenees will feature a succession of shorter, but steeper climbs which don’t reach truly asphyxiating elevations. The Alps follow with longer climbs which repeatedly reach over 2000m.

In terms of length, gradient, and height, the Peyresourde is the toughest mountain climbed so far in the Tour and the second climb is a good shout for second toughest so far. Surely given their position in the race, INEOS would be happy to set a high tempo across both climbs and neutralize any attacks. The question is whether they can.

In stage 6 to La Planche de Belles Filles, one of their two mountain domestiques, Wout Poels, absolutely cracked before the final climb which left their two leaders with just one helper (Kwiatkowski) for the final climb. As a result, Team Movistar set the tempo for much of the lower levels of the climb. Kwiatkowski fell away with just under 3km left to the summit and Thibaut Pinot’s team (FDJ) took over and ratcheted the pace upwards. This immediately shelled a number of riders and FDJ really controlled the final group until Alaphilippe rode away in the final KM.

The big story for stage 12 is how much control INEOS is prepared to exert over the final group or whether a team like Movistar or FDJ will be able to take command.

After the time trial, stage 14 is a much shorter one at 118km with a summit finish up the Tourmalet. In the last decade, the Tourmalet has featured nine times, but primarily as the appetizer earlier in the stage and just once as a summit finish. This will be the first and only taste of the truly high mountains in the Pyrenees as the final 14km will be raced above 1500m.

Stage 15 will continue the trend of shorter, but steep climbs in the Pyrenees with three climbs of at least 7% including the summit finish at Prat d’Albis. That will make seven climbs of around 7% or higher in the Pyrenees, with only one summit higher than 2000m. As we’ll see when we come to the Alpine stages, there will be six (and nearly seven) climbs reaching 2000m, and of the 210km riden in the race at elevations over 1500m, 191km will be in the final three Alpine stages. 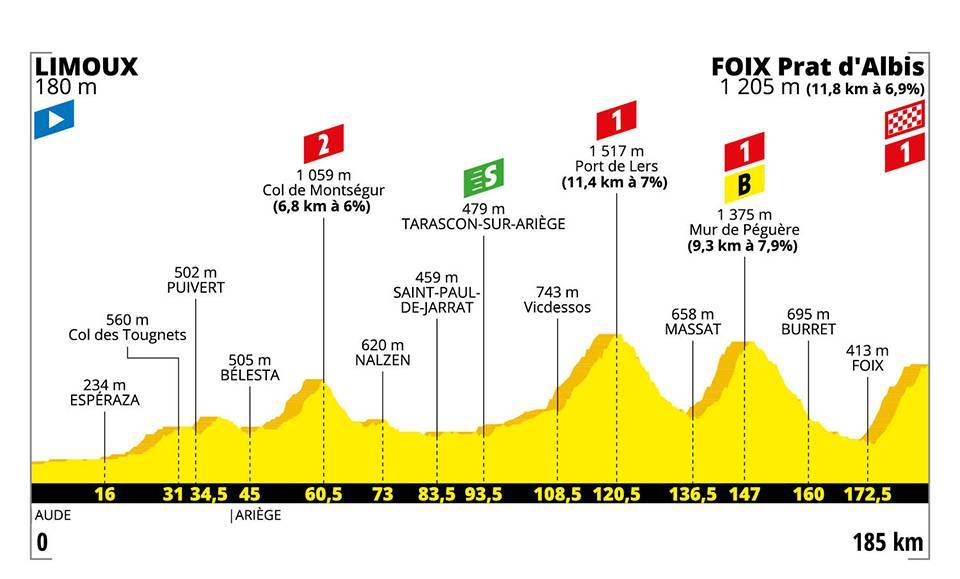 After his raid in stage 8, Julian Alaphilippe holds the yellow jersey by over a minute on Geraint Thomas. Given his ability to stick with the front group over a number of 1st/2nd category climbs (and even attack on the final climb) in stage 6, it’s not unreasonable that Alaphilippe rides with the final group over the second climb in stage 12. If he can manage to not get dropped on the lower slopes, his descending skills should allow him to stay in yellow.

As we’ve laid-out above, Alaphilippe is one of the better time trialists among the GC men. He’s projected to lose just 24 seconds to Geraint Thomas in stage 13. Again, it’s not unreasonable to see him in yellow after stage 13.

Further into the mountains in stages 14 and 15 will be tougher. He’s about 75th best in the world at climbing based on the metric introduced last week (though his ability is much more uncertain given his typical strategy is not to attempt to remain with the GC contenders, but rather to target a handful of stages to go for stage wins from the breakaway). Pure anecdote, but in his two stage wins in 2018 and in stage 6 this year, the elevations reached by the race were much lower than the average TDF mountain stage. Considering that, it seems much more likely his yellow jersey bid ends on the slopes of the Tourmalet in stage 14.

View all posts by jalnichols